Give the People What They Want

Over the weekend I surveyed my class to ask them how it’s going. I had heard a few rumblings of discontent about some specific issues and I was curious if there were any other issues I didn’t know about. I strongly believe that if you are going to go to the trouble of collecting student feedback, you should also take the time to read it, analyze it, and most importantly, respond to it. Addressing the issues raised in the survey was almost trivially easy, and the changes I’ve made will make a huge difference to most of my students. I’m so grateful that I didn’t wait for end-of-semester evaluations when it would have been too late to fix anything.

The important questions I asked in the survey were these: 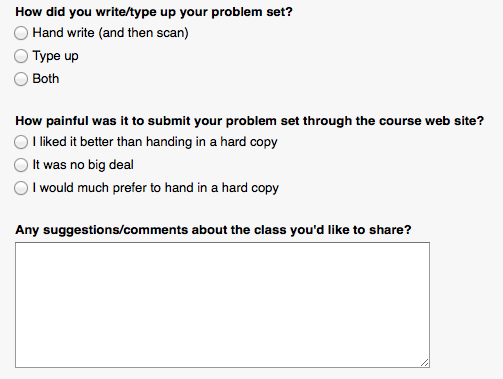 85 students answered the survey (55% of the class) and they had two major complaints.

First, they thought the problem sets were due too soon after I lectured on the relevant material. I would cover topics on Wednesday that were on the problem set that was due Thursday at midnight. I did this because I didn’t want the Friday discussion sections to be dominated by questions about problem sets. I wanted my students to walk in ready to focus on analyzing new data instead. Given that my teaching assistants and I are providing loads of office hours where students can ask questions to their heart’s content, I shouldn’t have been too worried about discussion section contamination. So, I decided to move the problem set due dates to the following Monday, and when I announced the policy change in class, the students spontaneously applauded.

Their second complaint was about the problem set submission process. I wanted to give them until midnight to do their homework and simplify its collection, grading, and distribution. It’s easy for students to submit pdf’s through Canvas, grading online is straight-forward, and no one has to carry any stacks of paper around. While I knew some students would have to put in a little extra effort to scan their handwritten work, I felt the benefits of paperless outweighed the costs. I was wrong.

74% of survey respondents said they handwrote at least part of their problem set and 48% said they would much prefer to hand in hard copy. One student said “submitting the problem set through the web site was so so so so painful.” Another described scanning their homework as “an awful experience.” So from now on, they can submit online or hard copy at the beginning of class on Mondays.

A couple students said that they didn’t like that my teaching assistants were only grading one randomly selected problem per problem set. They understood it freed up the teaching assistants to spend more time actually talking to them and answering questions, but they found it stressful that their grade was riding on exactly one problem. I responded to this by saying I would drop their lowest scoring problem set when computing their grade for the class. This announcement yielded another round of applause.

It’s not always the case that issues are so easily addressed, but when they are, I say give the people what they want!