Last week I was feeling pretty good about myself. We were four weeks into the semester and the lectures seemed to be going well. I had written three labs for my discussion sections, and my teaching assistants who “fielded” them seemed to like them. I didn’t have a clear idea of what the students thought of these labs, but I was cautiously optimistic. On Friday I committed to giving a presentation on these labs as an innovation in teaching at the upcoming Yale Technology Summit.

The first lab introduced the students to the Stata software by exploring the relationship between impulsivity and behavior among Connecticut high school students. The second had students exploring differences in male and female spending patterns using 2013 Consumer Expenditure Survey data. In the third lab, they analyzed the 2012 General Social Survey to see how often Americans go to the zoo and how they feel about gay marriage. The students also used simulation to gain intuition about the Central Limit Theorem.

I knew many students wouldn’t finish these labs in the allotted 50 minutes, but I wanted to challenge my more advanced students. It’s turned out that the labs were even longer and more challenging than I expected, and the consequences were worse than I expected. I discovered this when I asked my TA’s to count how many students came to section last week. The answer was 64 out of 150: 43%. I’m investing far too much in these labs to be happy with this.

So I sent out a survey to the class: 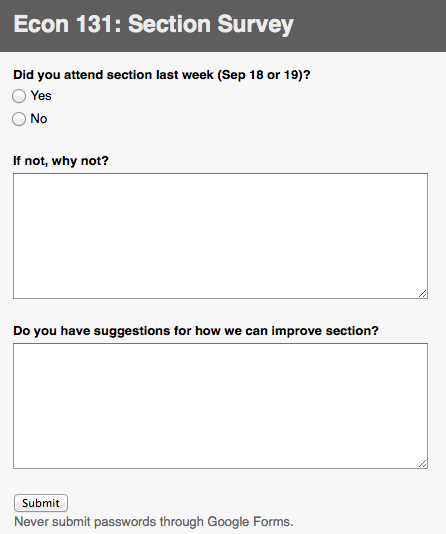 The answers were eye-opening. Almost unanimously, they thought the labs were too long, and they felt demoralized when they didn’t finish. Worse, my teaching assistants did their best to help the students to finish each lab. This translated into lots of lecturing and handing out answers instead of letting students work at their own pace.

The first few labs were always going to be a little different from the rest because everyone is learning the data analysis software. A little lecturing at this point in the process actually makes some sense. But from here on out, the labs are more about analyzing data and less about figuring out how to load a data set or interpret a Stata error message. Things should naturally get better, but there are still three things we plan to do differently:

I still believe in the social science lab concept, and hopefully these refinements will get us back on track in time for my October talk. Success stories are more fun to present than cautionary tales.