The other day one of my students came up to me after class and asked if I would be holding a review session before our upcoming midterm exam. I said I would not because I was philosophically opposed to review sessions. Maybe this was a little dramatic, but I do think most review sessions are counter-productive.

What typically happens is that the professor or a teaching assistant will spend an hour or so telling the students what he or she thinks are the most important concepts covered thus far in the class. Stepping back and looking at the class as a whole is an incredibly valuable exercise for students, but they won’t do it if you do it for them. I also find review sessions implicitly tell students what not to study. I would much rather they spend there time studying all the content.

At the same time, I didn’t want to use the last lecture before the midterm to teach new material–My students wouldn’t have time to digest it before the midterm, and if it wasn’t covered on the midterm, I wouldn’t have their full attention during class. Instead, I used the last lecture to have everyone practice working through problems that put together everything we’ve learned thus far and tried to build connections between seemingly unrelated concepts.

I started by putting all my students together in the groups of three–If they didn’t know each other, they had to introduce themselves. Then I gave them a pretty straight-forward problem to work through. As each group finished, they used their clickers to let me know their answer. I was absolutely thrilled when every single group got this first problem right. It’s always nice to start with some success. 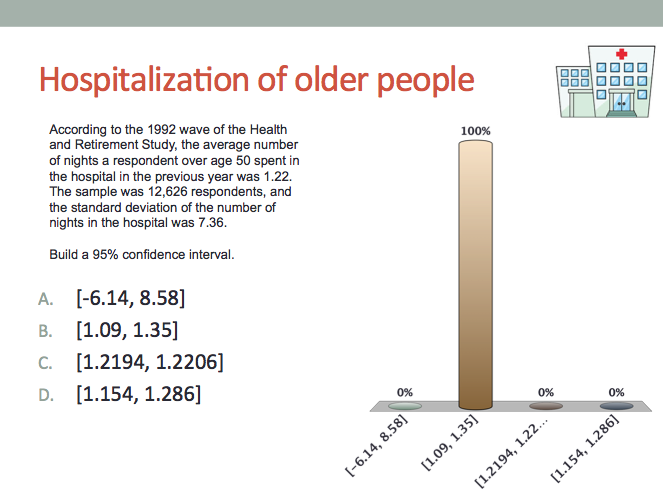 The next problem was a lot harder and pulled together ideas from the beginning of the class to the middle to things they had just learned. It was based on an experiment Dean Karlan and several of his students ran outside his house two years ago on Halloween. He randomly divided trick-or-treaters into treatment and control groups and let all kids choose between a healthy piece of fruit and a piece of candy. The treatment group made their choice next to a giant picture of Michele Obama, while the control group chose under the watchful eye of Ann Romney. 38\% of the kids over age 9 chose fruit, while only 19\% of the Romney kids made the healthy choice. The difference was statistically significant at a level of 11\%. As my students tried to figure out how many kids were involved the experiment based on the reported results, I wandered the room answering questions and giving hints to groups that got stuck. 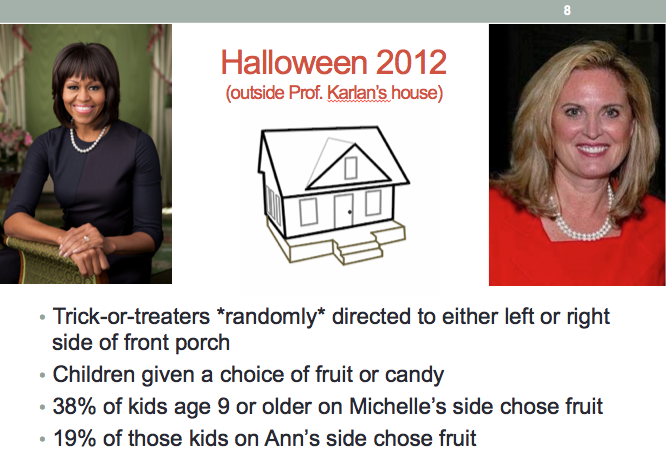 The third problem was based around a statement Toyota made back in 1987 about the reliability of the machine tools they sold to US firms. The students had to use 47 observations of uptime over 8 hour shifts to test the claim.

After each problem we regrouped and I went over the solution pointing out the key steps and how I approached it. I also tried to identify common mistakes and how to avoid them. Everyone seemed engaged through out, but to be honest, it’s hard to know how well the session worked. I hope the day brought ideas together that they hadn’t realized were related. And I hope they appreciated that they can now answer interesting many substantive questions with tools we’ve already learned.