Data Analysis Labs Get a B

At the beginning of the semester I was extremely excited about replacing my traditional sections with data analysis labs. It was a lot of work writing the 11 labs (and solutions), and they certainly got off to a rocky start, but they got better as the semester progressed and I’m very optimistic about doing them again next year with a few tweaks.

The vision was to have students come into section each week with their laptops and answer a new substantive question using new data and the methods they learned earlier that week. They would work in pairs, getting help as needed from their teaching assistant. The labs would provide practical experience and supplement the mathematical and intuitive understanding of methods they get from lecture, problem sets, and the book.

Opinions about the sections among the students were mixed but on net positive. In our end-of-semester survey (response rate: 40%) I asked them what they thought of the data analysis labs relative to traditional discussion sections: 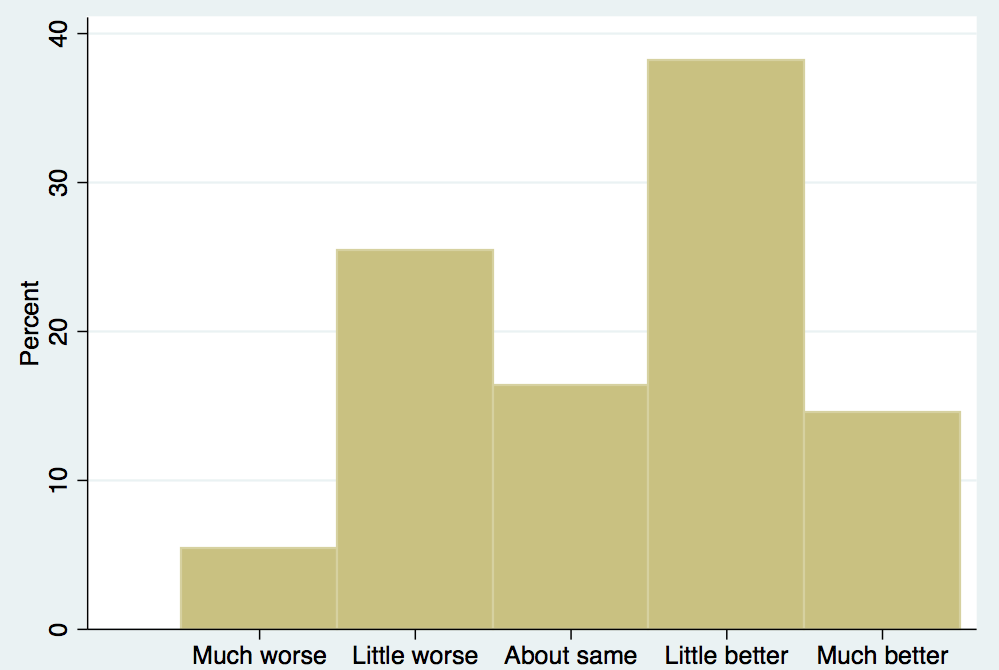 The students that thought they were better (53%) said things like:

We were able to apply what we went over in class and to learn a very useful skill (stata).

I viewed labs as an opportunity to work on problem sets with other people and check my answers, plus ask the TAs for help … I feel like I know Stata much, much better than my friends who’ve taken 131 in the past. It was pretty cool to work with actual data.

The data analysis labs were awesome! They started off slow when I was still trying to learn STATA, but after we started using STATA to run statistical tests, the labs were great! I loved leaving lab each week feeling like I had learn some new real-world applicable skill. The skills I learned in discussion section labs, would have been so much harder to develop if I had had to learn STATA on my own. The labs have allowed me to collect my own data, input and merge data files in STATA and run regression analysis for other classes. This is the most technical skill I have learned to date at Yale.

On the other hand, several students wanted to see a tighter link with the conceptual/mathematical material we covered during lecture. Even though I often asked them to compute statistics by hand and compare the result to what they get from Stata, it wasn’t enough:

My main recommendation for the labs is to incorporate more of the week’s conceptual material into them. It felt pretty easy to just follow the directions of the lab without really understanding what was going on – you just plug in some commands and, viola, the correct numbers come out. Asking more “why” questions would be very helpful in this regard, for example. I view this lack of conceptual rigor as a main reason why people didn’t show up to section. Once people understood Stata well enough, they didn’t have to come to section, since they didn’t need to understand the concepts and could just plug in some commands.

I thought that more review of course concepts and actual application of things we learned that week in lecture could have been helpful – lectures and labs sometimes felt a little bit removed from each other.

We didn’t review anything from class ever (in terms of walking through practice problems), so it was troubling to study everything on our own and then wait for Piazza answers.

This last comment comes from one of a few students that missed traditional discussion sections (the 31% who thought the labs were worse). These students also said things like “not enough learning from the TAs” and “Cannot replace traditional problem solving and concepts-explaining sections.” A few wanted the TA’s to guide everyone through the labs in lockstep, which is exactly not what I wanted them to do. Some students just aren’t used to (or just don’t like) more self-directed active learning, but I do agree that there is some value in watching someone else solve problems. It might be worth having one of my teaching assistants record video solutions to all the problem sets to accompany the written solutions that I distribute.

There’s also room for improvement in the dynamic between the students who came to lab and the teaching assistants. Some students needed more help:

If someone was stuck, she wouldn’t go over stuff together or help us much. It was as if we had to teach ourselves then felt not worth it to be there.

I do want them to teach themselves, but finding a balance between leaving them completely alone and lecturing to them was difficult. This got better as the semester went on, but in order to get it on track more quickly, I’m going to attend the first two labs and help the teaching assistants in person next year.

Some students didn’t recognize that they were supposed to be learning some skills in lab that weren’t tested on exams:

Need to focus on what is taught in the class. Too Stata driven when exams are not as Stata driven.

I firmly believe that looking at data analysis practically and actually doing it gave many students a better grasp of the methods that were being tested on the exams. And I think some of the students didn’t realize this was happening. The technical data analysis skills they learned in lab were also important, and they were assessed in the problem sets and their big empirical project. I need to be clearer up front that the exams won’t cover everything.

Attendance at labs was not required and it dropped to about 40% by the end of the semester. There was a small bump up when I begged them to come back and told them lab questions would be included on problem sets, but it didn’t last. Once students stopped going, it was hard to convince them to return, and even when they did it was hard for them to catch up:

To be completely honest, I didn’t go to section because after I went to the first two, I lumped this class in with all of the other classes where sections gave me absolutely no help, and felt too awkward to try to return to section after I hadn’t been there in quite a few weeks.

That was a shame because another student noted about the labs that:

The best way to fix this problem is to keep students from giving up on section in the first place. That means next year I’ll be retrofitting the first half of the term with the changes I made in the second half this year such as shortening the labs and previewing them during lecture. Learning the basics of Stata in a 50-minute lab environment in the first two weeks was also tough. Next year I’m going to try having all my students to take the two hour Introduction to Stata course offered through the Yale Statlab. That should have the side benefit that the often painful steep part of the learning curve won’t be associated with the sections themselves.

Going into the semester, I thought the labs would be a bigger hit with more of the students. I thought my enthusiasm for data analysis would be more contagious. Hopefully, with a few changes, it will be next year.