Canvas Course Management System Gets an A-

Every class at Yale has an associated Sakai web site where the professor can track enrollment for the class, post the syllabus, and make announcements. Students can also submit work, look at their grades, and sometimes participate in discussion forums. The software works, but it could be a lot better. I used Canvas (by Instructure) when I taught online over the summer and liked it so much I decided to use it this fall too. It went well, but with a few important caveats.

My favorite feature of Canvas is the ability to organize content with weekly web pages that list the topics we cover and point to lecture slides, handouts, upcoming assignments, recorded lectures, and online quizzes: 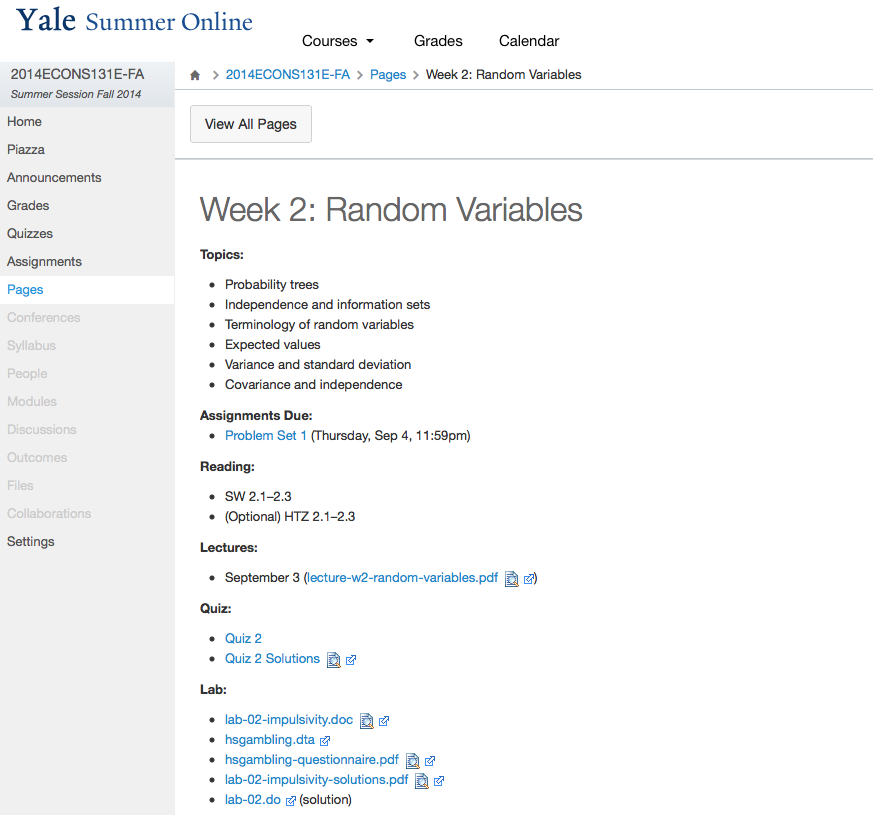 In our old system, students would have to follow along in the syllabus and browse a rudimentary folder structure associated with the course:

My students appreciated the Canvas software too. In our end-of-semester survey about what worked and what didn’t (40% response rate: 56 of 140), 57% said they thought Canvas was “much better” than their usual Sakai (aka classes*v2) experience, and 32% thought it was “a little better”. Just 9% said it was about the same and exactly one student thought it was “a little worse”. That said, I think these numbers are slightly biased upward. Even though I specifically asked about Canvas, it’s clear from the comments that several students were rating the overall class web experience including Piazza and the recorded video lectures, both of which they loved.

For the most part, students liked the organization of the web site:

I like how it has all of our assignments laid out in an easy to read fashion, giving you a to do list, estimates of our grades. It’s easy to navigate, easy to see how you’re doing, and easy to see each week laid out to see what we learned about.

It was much better laid out, I really liked that everything was organized. Sometimes navigating between pages was clunky but overall, everything was 500% better than ClassesV2.

But they weren’t perfectly happy. Several students didn’t like having multiple places to go for the their classes:

I think theoretically it’s a good idea, but the reality is that a lot of students just got frustrated with having to deal with more web platforms. It’s a good idea, but imagine from our perspective - what if every professor we had decided to use a different website? Takes a while to get used to.

Web address is hard to enter. Search canvas yale won’t give the website. Classesv2 is easier to remember and search for.

A little more institutional support would go a long way here. In particular, having the standard course management system link directly to Canvas instead of Sakai for the courses that use Canvas would solve the “discovery” problem. It would also be really nice to have the Canvas roster automatically synchronized with the class enrollment.

Feedback was more mixed about the automatically graded online quizzes that I implemented in Canvas. Students had to take them every week, and they could retake them as many times as they liked until they were happy with their score. The idea was to motivate them to keep up with the material as the semester progressed and work toward mastery. 23% found the quizzes very helpful and 48% thought they were a little helpful:

The quizzes were very helpful for checking comprehension and giving little examples to practice computation by hand.

with respect to the quizzes, the answers to them were most helpful, not necessarily taking them… being able to review sample true/falses and have our knowledge of the theories tested was helpful.

29% thought they were not helpful. Their comments are illuminating:

Because we had unlimited tries, I found myself just guessing sometimes and redoing the quiz until I got a 10/10.

I have one comment on the quizzes - if there is a way to hide which answers you got correct that would be a great improvement. After I took the very first quiz of the year and realized instructure tells you the answers, it turned more or less into a guessing game, which while I realize that eliminates the benefit to me, also saved me time. Saving time won out over giving an honest attempt the rest of the semester.

It turns out the devil is in the details here. I’m pretty sure I can do what the second student suggests, but I’m not sure it would improve learning as students wouldn’t know what they were doing wrong. I am more tempted to limit them to just two quiz attempts so they put a little more honest effort into their second try.

The two biggest issues I had with Canvas this semester really had very little to do with Canvas itself: It needs to be better integrated into Yale’s infrastructure, and I need to figure out a better way to do the online quizzes.

If you’re at Yale and you want to try out Canvas for your course, Lucas Swineford can set you up. If you’re somewhere else, and you don’t have local support, it’s still pretty easy to set up a free account on Instructure’s servers.