On a recent episode of the Teach Better Podcast, Boris Kapustin told me that he hates the word fun. I actually understand where he’s coming from. What we teach is important and we both want our students to work hard and take it seriously. At the same time, I firmly believe fun can induce hard work and serious learning. That was the idea behind the end-of-semester poster session I organized last night for my econometrics class. It was full of fun, exchange of ideas, and absolutely it was the result of hard work on everyone’s part.

All semester my students have been working in small (3-5 person) groups on empirical projects. On the first day I gave them four data sets they could use (a high school survey on risky behaviors, the Consumer Expenditure Survey, the General Social Survey, and a survey of firms in Vietnam), but they were also free to analyze other data. Then each of the class’s thirty small (3-5 person) groups came up with their own research question. They will pass in their written analysis reports next week, but this was their chance to share their findings with the rest of the class and get feedback. 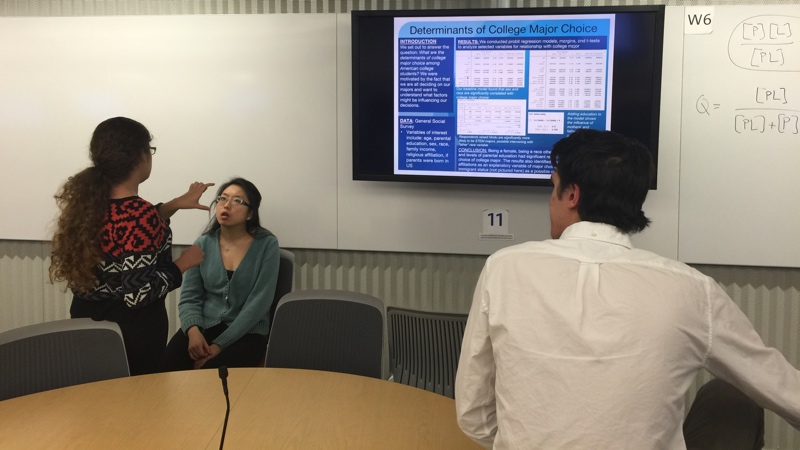 The structure of the fair was very similar to the poster session I ran last spring for my Economics of Human Capital in Latin America seminar, but the scale was quite different: 117 students vs. 25. On the other hand, my seminar students presented 25 individual projects, and last night almost the same number groups presented. We started in the evening and had three 40 minute rounds where a third of the groups showed their posters and the rest mingled and asked questions. Not all the students attended all the rounds, but enough did that there was good discussion.

After each round, everyone voted on Best Presentation and Best Project. My original plan was to present awards at the end of the night, but most of the first rounders were gone by the time we finished (after 10pm), so I’ll be compiling the data and announcing awards tomorrow. Next year I want to do the session before the last day of class so I can hand out the awards during class.

We held the fair in the same fancy technology room as last year too since it has 15 big computer displays on the walls that are perfect for showing posters. A few of the posters were hard to read, so I’ll need to be clearer about communicating minimum font sizes next time. It was also a lot of fun to live tweet the whole event. 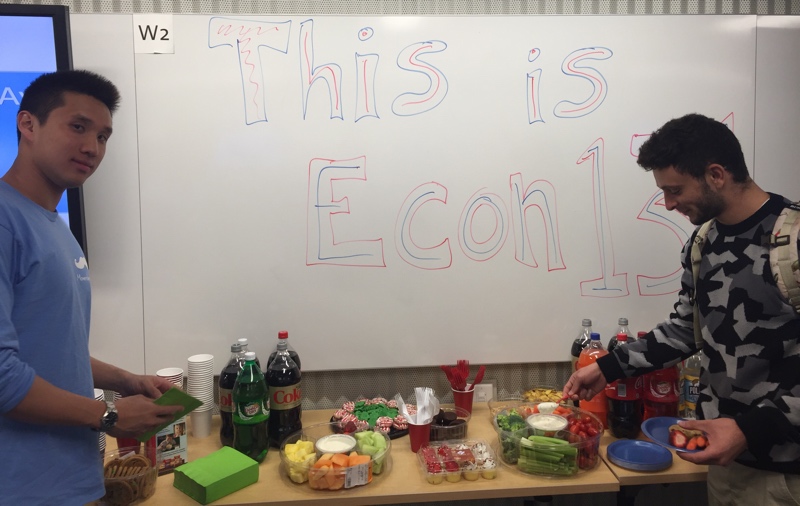 The food, drink, and music was simple but effective: Lots of cookies, cupcakes, veggies, fruit, and nuts with a wide range of non-alcoholic beverages. The chocolate milk and apple cider I bought for myself were surprisingly popular. No one complained about my Spotify “Totally 80’s” playlist, and I thoroughly enjoyed it.

Do I have a long list of things I’m going to change or tweek for next year? Oh yes. Am I already excited to do it again next year? Yes again! And if anyone is inspired by this fair (as I was inspired by the CS50 Project Fair, I would be happy answer questions and/or give advice.