Lecturing with an iPad Pro

Back in November, Fraser Speirs wrote about switching from an iPad Pro to a MacBook Pro :

If you’re an artist, note-taker or teacher, you’re going to really struggle without the native ability to use an Apple Pencil on the screen….Of course you could haul along a Wacom tablet to make up for the lack of pen input on your MacBook Pro, but suddenly you’re hauling a whole lot more cables and looking for a substantial desk space when out and about.

Hmm. This is exactly how I had been lecturing for the past two years, and it was in fact just as painful as Fraser made it sound. The moment I read this I knew I would eventually have to get an iPad Pro for lecturing. What I didn’t know was that Matt Regan at the Yale Center for Teaching and Learning would lend me an iPad Pro for use this semester! (Matt has since moved right next door and is now the Communications Manager at Yale’s Cowles Foundation for Research in Economics).

On Wednesday afternoons I teach the Economics of Human Capital in Latin America. There’s a fair amount of slide presentation by both me and my students during the class. We explain methods, walk everyone through tables of empirical results, and pose questions for discussion. On Monday mornings I teach advanced biostatistics in the medical school. I use slides, but there’s an added wrinkle as I also record all my lectures for students that have to miss class. This semester I’ve experimented with several ways of using the iPad Pro in both classes and settled on a few workflows that work well for me. 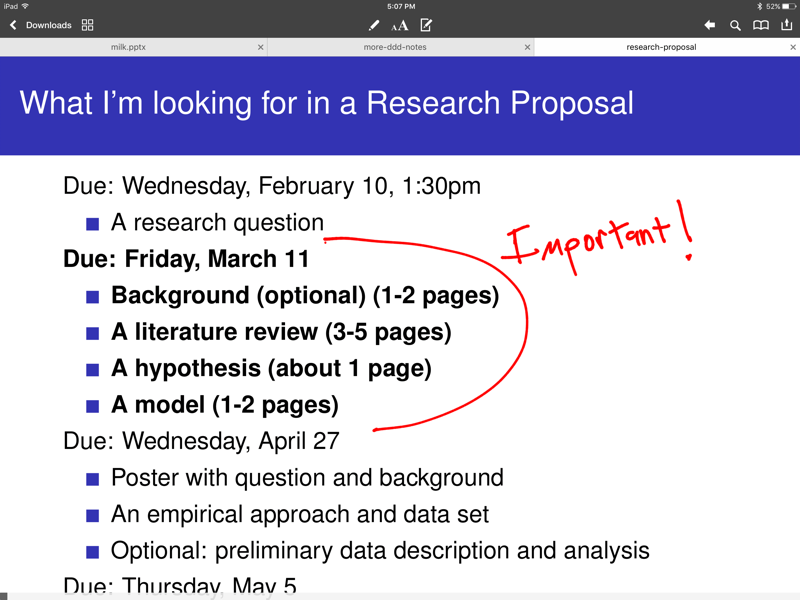 PDF Expert is a terrific app for annotating PDF’s on the iPad, and it’s not bad for presentation. The Apple Pencil works nicely and the user interface will get out of the way, but you have to turn your presentation into a PDF to enable the annotation features. My students like to occasionally use PowerPoint animations in their slides, and these disappear during the translation process. 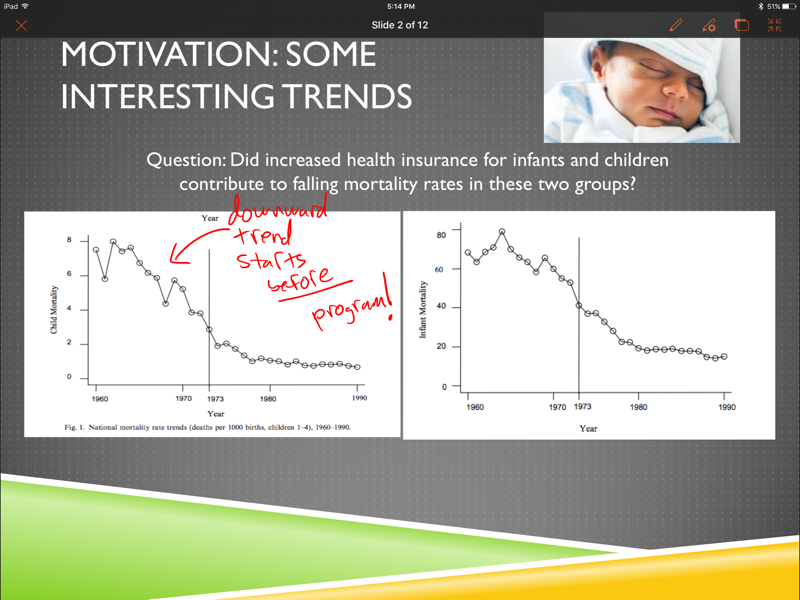 Having read some very positive reviews of PowerPoint for iOS, I thought this would be a slam dunk. I can open presentations directly from Dropbox and the user interface is excellent, but the first time I tried it, the Apple Pencil support was awful. Until the Febrary 26 update (1.18.5) there was major lag and even worse it was just ignoring every third or fourth stroke. I’m looking forward to trying PowerPoint again in class this week now that the Pencil support is fixed, and at the same time they added the ability to save the annotations you make while presenting. Well done Microsoft! 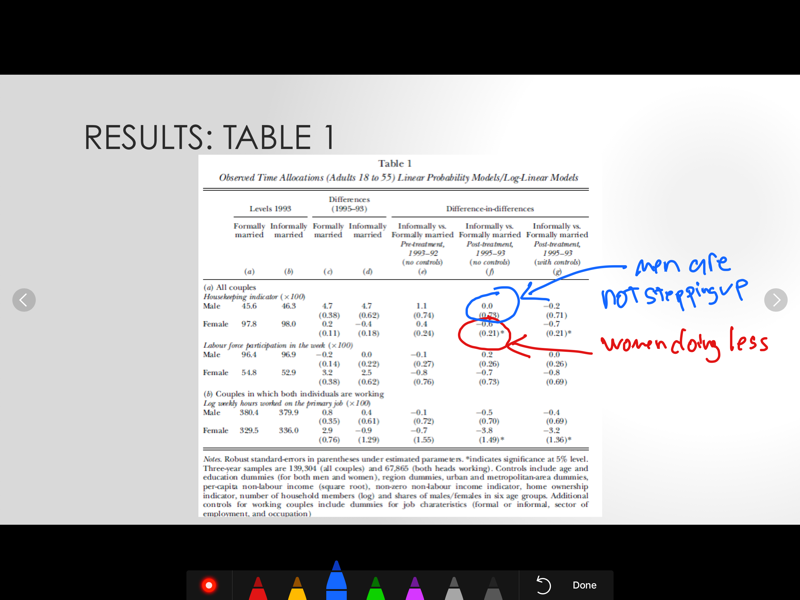 Keynote imports PowerPoint presentations (with animations intact), and it has a nice annotation interface with silky smooth Pencil support. That’s what Colin is using in the picture at the top of the page–You can’t see his big smile as he writes directly on the slides, but trust me that it’s there. I haven’t figured out how to open Dropbox files from the app, but it’s not hard to browse in the Dropbox app and then copy presentations over to Keynote. If Microsoft hadn’t fixed PowerPoint, I’d still be using this. 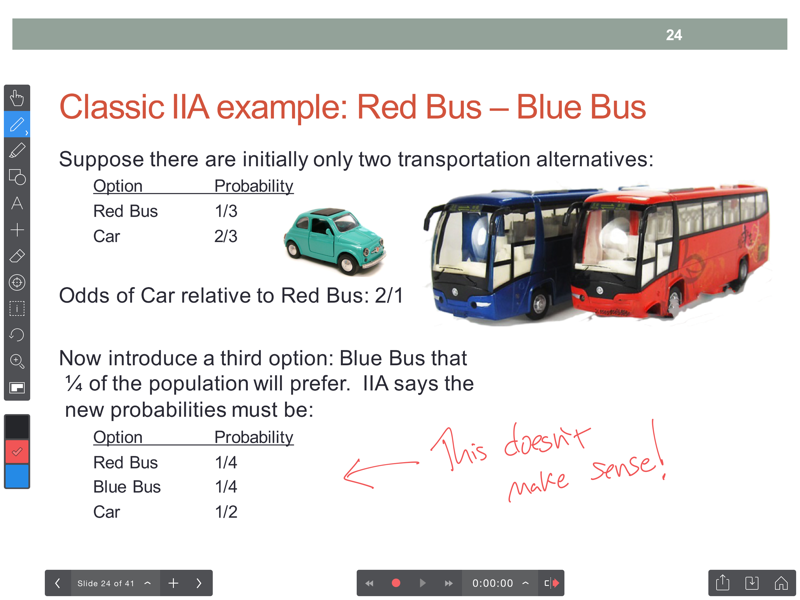 Many people have great luck using Explain Everything to record presentations, but it turns out to be a pretty lousy tool for live presenting. It’s mildly annoying that the annotation tools are always on screen, but the main problem is that it records separate videos for each slide. That means everytime you scroll back to a previous slide the app asks if you want to overwrite the last video or extend it. Explain Everything then catenates all these videos together when you export the whole thing at the end. Ugh.

What I would really like is to be able to turn on screen recording (like QuickTime on the Mac) and then go about presenting as I do in my Human Capital class using PowerPoint. Unfortunately Apple doesn’t provide this functionality in iOS and while there was an app called Vidyo that did this, Apple pulled it for violating terms of service about five minutes after it launched. I’m still kicking myself for not buying it during that short window. 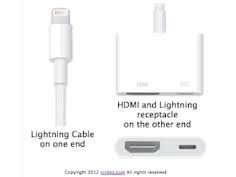 Another thought I had was to connect the iPad to a Mac and use QuickTime to record the screen from there. It would be inelegant to bring both devices to the classroom, but I was willing to do it. Alas, the iPad has just one Lightning port and I need it for the projector. You might think I could use the Lightning port on the Lightning-to-HDMI dongle, but that only lets you charge the battery while presenting. 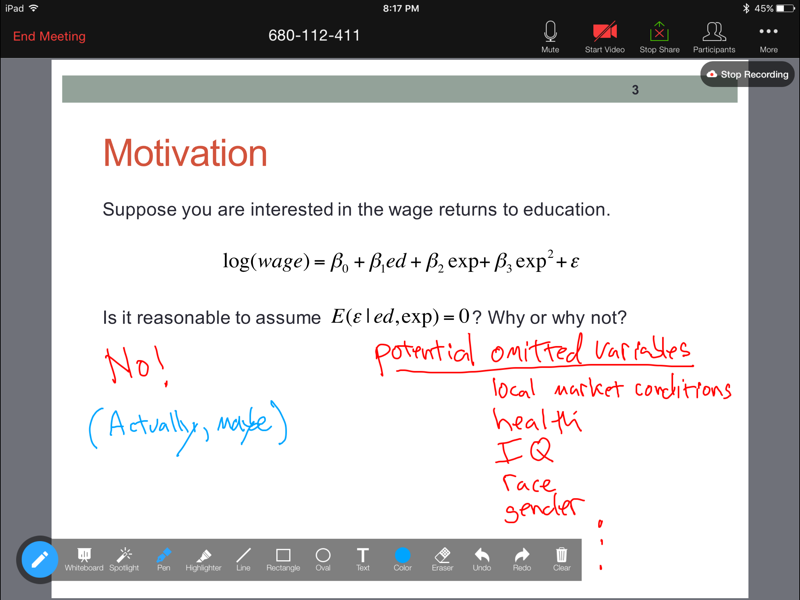 After trying all the methods above, I had given up and thought I’d have to go back to Mac-and-Wacom land, but my friend John Harford had a really creative idea: He suggested I teach the class in a Zoom conference room (with no other participants), share my slides, use Zoom tools to annotate them, and then record the whole thing through the iOS app. Believe it or not, it works pretty well! The Apple Pencil works well, the annotation tools get out of the way, and the recording quality is reasonable. This is what I’m using for the rest of the semester in biostatistics.

I already like lecturing with the iPad Pro much more than using my MacBook. My handwriting is so much better than when I wrote on the Wacom, it feels so much more natural, and the presentation apps are getting even better every day. I also think someone (maybe Apple) will come up with a more elegant solution for live lecture recording. On the hardware side, it’s looking like Apple will soon release a 9.7” version of the iPad Pro. I’m going to have to return the Pro I’m borrowing at the end of the semester, and while the big screen is nice, it’s a little bulky. There’s no doubt I’ll buy an iPad with pencil support for lecturing some time in May–The only real question is the size.