Playing Games on the First Day with MobLab

Introductory economics courses usually include a lot of handwaving. Students learn the basic concepts (e.g., supply and demand), but the math involved is pretty simplistic. That all changes in Intermediate Micro where students build and analyze serious mathematical models using calculus. I’m teaching this course right now, and I’m using MobLab to mix in some fun experiential learning.

MobLab is an inexpensive service that lets instructors set up a wide range of economics-related games that can be played by students inside or outside class. We jumped right in on the first day of class with students (about 50 of them) pretending they were firms deciding how many scooters to produce. 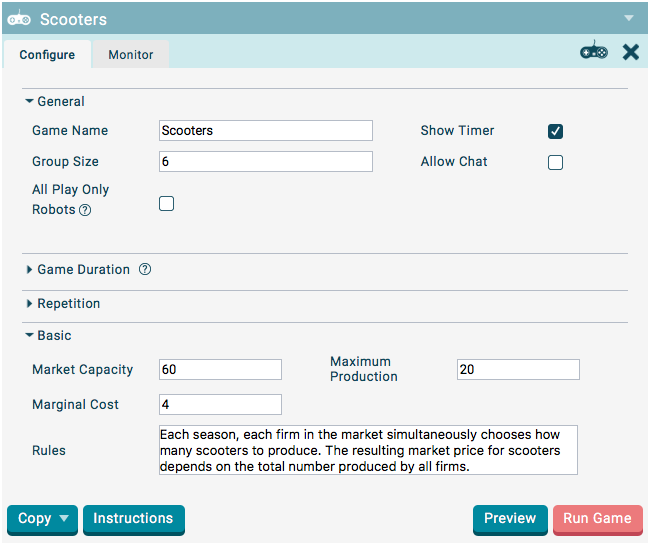 I configured the first game to organize students into groups (markets) with 6 firms each. Scooters cost $4 to make, and the price that they will get in the market depends on the total number produced by all the firms in that market. Before deciding how much they will produce, students can explore the relationship between market price and total production using a slider. 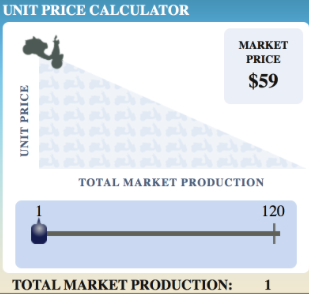 After I start the game, an onscreen monitor shows which groups are still thinking and which have finished choosing their production. Each student is told how much profit they made when their group finishes, and when all the groups are done, I see a nice graph summarizing what happened. The X’s are the equilibrium price and quanitity for each group.

It would be even better If I could initially show the outcomes without the monopoly, Nash, and perfectly competitive equilibria quantities marked. I’d also like to see the mean prices, profits, and quantities for the groups, though it’s pretty easy to eyeball them from the graph.

We played this game a few times, and the average outcome moved close to what you would expect from a perfectly competitive market. If we had time to play a few more times, I bet the variance would have come way down too. Once the game was over, we worked through the algebra to compute the perfectly competitive equilibrium–They all did similar calculations in their introductory course, but it was good to get the math juices flowing again after a long winter break.

Next, there was a “wave of mergers and acquisitions in the scooter markets.” In each case, now only two firms controlled all the production. The costs of production and the market demand stayed exactly the same and the students played another few rounds. This single change to the market structure resulted in quite different equilibrium outcomes. As predicted by theory, total production went down while prices and profits went up. It was a great segue into working through the math behind a Cournot duopoly.

I’m teaching two sections of the same class this semester, and was able to run through the whole process twice yesterday. The morning class was good, but very quiet while the students were choosing production levels. In the afternoon I encouraged students to talk to each other about their strategies. They didn’t know who was in their particular market, so it wasn’t an opportunity for collusion. I think they got more out of the exercise and it was definitely more fun.

Was it risky trying this on the first day of class? Sure–You never get a second chance to make a first impression. Luckily this technology is pretty solid. It’s also a nice break from the sometimes brutal math we’ll be doing, and I’m looking forward to seeing how active participation in different kinds of markets helps my students understand how they work.