After being invited to help with a wide range of different activities for my girls’ elementary school over the last year, I finally said yes to helping run the Math Club. We had our first meeting two weeks ago and it was awesome.

As a high school student, I really enjoyed math club. We worked on interesting problems, explored pockets of math that were ignored in class, and just had fun. It was a special place where math was unapologetically cool, and the problem solving strategies I learned served me well in my college (and grad school) math classes. Creating this experience for elementary school kids seemed like a great opportunity to pay it forward, but I also had my worries. Inter-school competitions were part of my own math club, but they were a small part. We were much more a club than a team, and I want that to be true of the Belle Sherman Elementary School Math Club too.

Another worry I had was my complete lack of experience teaching fourth or fifth graders. I’ve managed many a birthday activity for younger kids and run plenty of wild college classroom activities, but this was sure to be a different beast. Of course, I was a hyperactive class clown when I was a kid, so I think I have some insight and I definitely have empathy for “difficult” kids. My real ace in the hole is that I’m not actually running the show—That’s Tom’s job. He ran the club for a few years back when his kids went to the school, so he’s got a whole bag of fun problems and lots of experience with what worked and what didn’t.

At our first meeting, we had 21 kids, almost half of which are girls. We started by organizing them into groups of 4 or 5 at tables. Then we went around and everyone told us their name, favorite color, and favorite animal. I thought this would help me memorize the names, but I really just need to make and study a picture roster.

Then Tom introduced a problem: You have three things that you need to move across a river: a goat, a wolf, and a cabbage. The catch is that your boat only fits one of them at a time along with yourself. I remember as a kid working on a similar river-crossing problem with missionaries and cannibals, but the goat formulation is unarguably more kid-appropriate. We asked the groups work together to figure it out, and then we wandered the room helping groups that were stuck.

Some groups had someone in the group who’d seen the problem before. These groups practiced explaining the answer to me, where each kid could only tell me one move. It got everyone talking. Then I asked them if that was the only solution, and they searched for more. One group figured out that there were infinite solutions. Cool! Some groups needed a nudge. Have you thought about taking something back to the original side of the river?

Tom brought a real cabbage, we both brought stuffed animal goats, and I brought a stuffed dog that pretended to be the wolf. When the groups were done, one of the groups acted out their solution and we had a big group discussion about alternative solutions. The exercise got a little raucous, but most kids were mostly focused. And I think they had fun.

Our second activity was to come up with a set of rules for the club. Tom and I had a few, but mostly the kids suggested them and I wrote them down. The following week I handed out printed copies of my nicely typed up list. They definitely paid attention, and I think (hope) the fact that they participated creating the rules means they will be more likely to follow them. 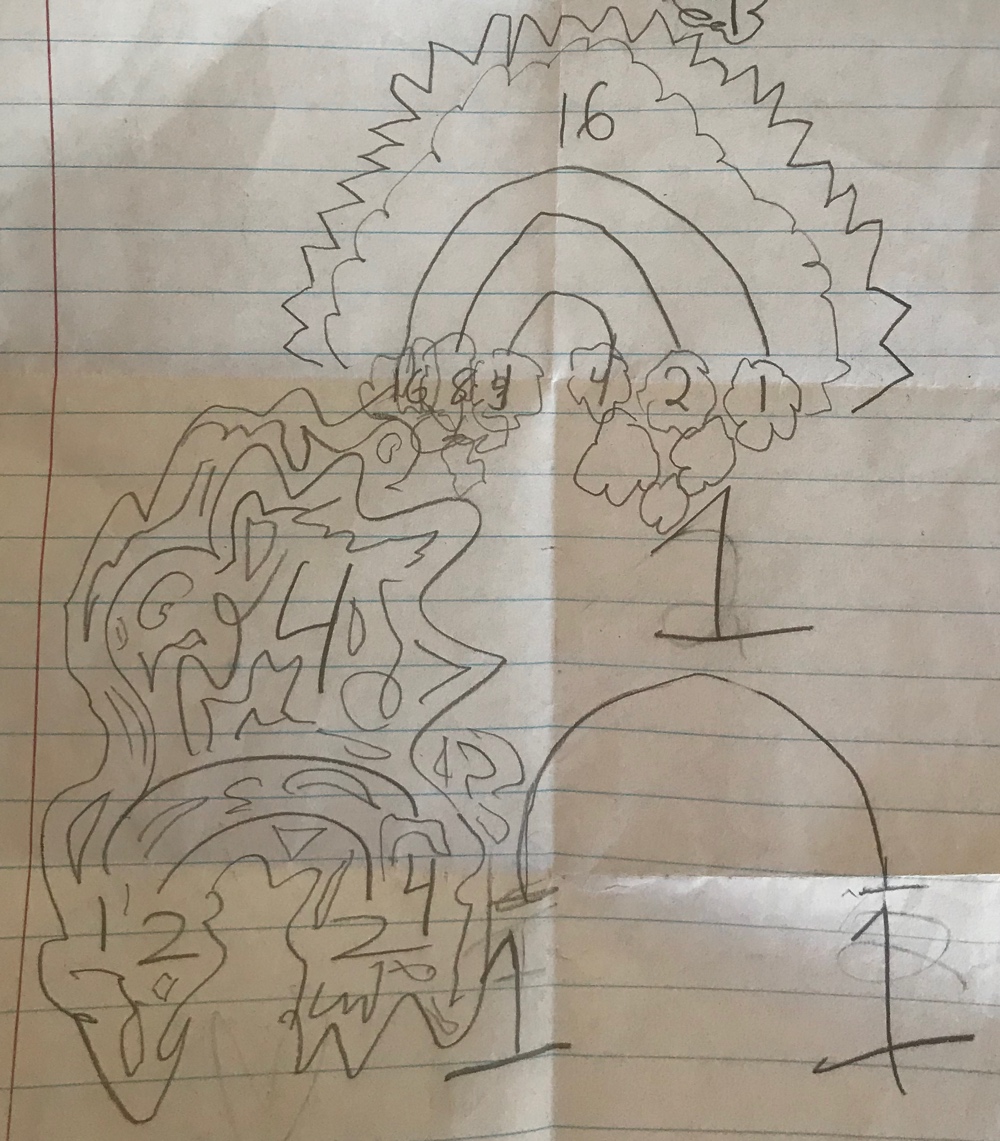 The kids went back to their groups to try and figure out what was special about these numbers. Tom suggested making factor rainbows for all the numbers from 1 to 16 and seeing what was special about the face up numbers, but most kids (and I) thought he asked them to just make factor rainbows for the face up numbers. This exercise was magical (good), but I don’t think anyone had that aha moment where they understood WHY the card flipping exercise resulted in a set of perfect squares. Tom returned to this the following week and many of us had that ah ha moment where we saw how it worked. Very cool. This is going to be an illuminating year for everyone involved!